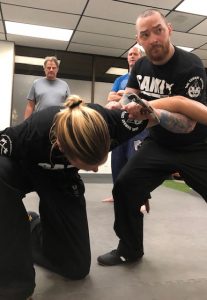 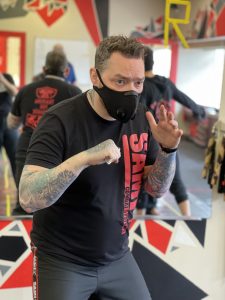 School owner/Chief Instructor – Robert Nichols has been studying martial arts for over 30 years. He is as passionate about learning now then ever. Mr. Nichols currently holds black belts from various martial arts schools and in different styles of martial arts. He is a fifth-degree black belt in TaeKwonDo as well as a seventh-degree black belt in Ninjutsu. He is currently the highest-ranking SAMI Knife Fighting Instructor in America, and in 2017 became the first sanctioned SAMI Training Center owner in America. In 2018, he also became licensed in SAMI Panantukan concepts, SAMI Axe and Tomahawk Fighting Concepts, and SAMI Law Enforcement training concept. In 2019 he also learned the SAMICS Expandable Baton Concept for Law enforcement. A multiple time inductee of the United States Martial Arts Hall Of Fame as “Instructor of the year,” Mr. Nichols has proudly run Union UTA since its opening in 2001. He was listed in and on the cover of the 2020 Action Martial Arts Hall of Honors history book. An anti-bullying consultant and martial arts business consultant, Mr. Nichols married his high school sweetheart in 2006 and lives with her and his daughter in western NJ. An active member in the community, both in his hometown and in Union, Mr. Nichols believes deeply in the value of martial arts training as a vehicle for self-improvement.

Get started today with our FREE Trials! Experience our martial arts training program first hand and see how Union UTA Martial Arts/SAMI Union can change your life! For children, teens, and adults, we have the action-packed, fun, and disciplined classes for you!

The pride of our martial arts school is our interactive leadership program. Our leadership program helps students gain confidence and focus by providing them with tools to become leaders. Our leadership team is the group of instructors that run our martial arts classes daily. Each instructor is a certified martial arts instructor and trained personally by Mr. Nichols to teach our curriculum. Instructors range in age — though some may seem young, they have all passed a written, verbal, and practical evaluation. Instructors should be able to answer many questions about curriculum, events, and much more and can be a very helpful resource to parents. As well as junior instructors, we also have office personnel that are there to answer questions and assist parents in any way possible. Please feel free to speak to them about anything. More important than anything, our leadership team serves as mentors and activists in our community. Being an active member of this team is the ultimate goal of all of our students.

Our martial arts school opened in 2001 and since then we‘ve grown tremendously! We’ve become a school of more than:

WE ARE THE LARGEST MARTIAL ARTS SCHOOL IN UNION!

Family owned and operated since our opening in 2001, Union UTA started as a traditional martial arts school. With great respect to traditional martial arts, we choose to have more of an adaptive curriculum, evolving and adjusting to the needs of our students. Our martial arts training program has grown to include aspects of kickboxing, Ninjitsu, Judo, grappling, Kali, combative knife concepts, and dirty boxing. Not only do our students work toward their black belts in our system, but through the practice of many aspects of martial arts, focus on improving themselves as individuals. We think of ourselves as a personal improvement and self defense school above all else.

Our organization not only benefits the students in our martial arts classes but also spends time giving back. For instance, the organization successfully raising over $50,000 for the Cystic Fibrosis Foundation. In the past several years, we have helped raise over $450,000 for children’s charities. Other charities we have sponsored include The March of Dimes, COSAC, and various children’s cancer organizations. Union UTA has always strives to give back to our community. With our leadership team spending time on community service projects.

Union UTA also hosts a number of other events annually, such as tournaments, demos, parties, and testing. We offer several training seminars throughout the year for SAMICS and children’s special events as well. Union UTA also participates in many local events, fairs, and outings. We feel a personal responsibility to be involved with our community and its members.

Our constant mindset is to not stand still, but to grow and evolve. We can always adjust and grow. Not just our students, but as a business as well. We believe this constant state of growth is what helps set us apart as a community.

With different goals for both our children and adults, Union UTA’s martial arts school focuses on each individual’s goals and growth. So regardless of a student’s reasons for joining our program, it’s our commitment to excellence and service that help our students achieve. Contact us today to learn more and sign up for martial arts classes!