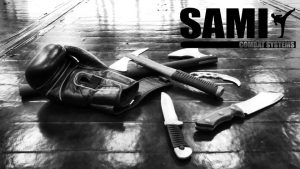 is returning with 3 SAMICS Workshops.

against a blade, use of the blade in combat, skill development, and combative application

Saturday Feb 1st 12pm to 230pm- Reviewing materials for Knife and Panantukan testing to prepare for the March Intensive courses.
We will cover the more complicated material from these subjects, review testing requirements, and improve testing material. If you are planning on taking an exam at the March Intensive course, this course may be used to help fulfill testing requirements. 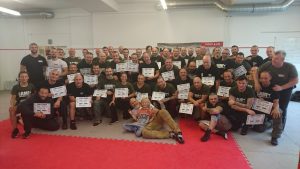 March 19th & 20th- Knife Fighting Concept  Concept- 9am to 330pm
March 21st & 22nd- Panantukan Concept- 9am to 330pm
Both courses will include OPTIONAL exams in these subjects
(prerequisites must be met and approved. Prerequisite questions on registration form)
Pricing for Course -One Day- $140 One intensive subject-$250 Both Intensive subjects-$465

There are currently NO scheduled orders. If you need an equipment package or item from this page please contact the main office for delivery dates.

Please let us know if you have any questions BEFORE placing your orders.